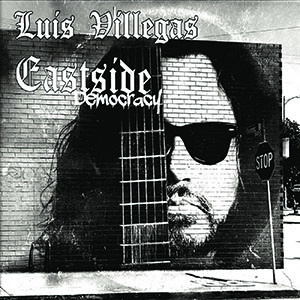 Villegas' first album of original material in over 10 years! A tribute to the 70's Brown Sound as exemplified by bands like Tierra and War, this CD has Villegas doing versions of Malo's "Suavecito" and El Chicano's "Viva Tirado"as well as originals like "Eastside" and "It Was You" in this chicano-rock style. Luis' touch is obvious on originals "La Malinche" and "Evergreen" both showcasing his dexterity on the spanish guitar. Another original,"Boulevard Knights", gives us a taste of smooth jazz guitar while Jose Feliciano's "Affirmation" infuses a little 70's style funk into the mix.

Villegas is joined by musicians like Rudy and Steve Salas and Joey Guerra of Tierra, Sal Rodriguez of War as well as seasoned studio musicians such as drummers Gregg Bissonette and Curt Bisquera, bassist Rene Camacho, percussionist Pete Korpela and George Benson guitarist Mike O'Neil that augment his live band members Chris Trujillo, Jose Garcia and Juan Carlos Portillo. This is an album that was recorded with over 25 musicians in 12 different studios and clocks in at almost one hour and leaves you wanting to hear it over and over again.

Save this product for later
Display prices in: USD